I have a dear friend who emailed this morning, wishing me happy anniversary. You see, it's not my wedding anniversary, nor the day I became engaged, but it is the 75th anniversary of a film that defines every southern girl's inheritance, Gone With the Wind.

When you are born, people look at you in two categories,

Melanie, the steadfast woman of simple beauty whose heart belonged to only one man, Ashley Wilkes, or
Scarlett, a self centered, stunning beauty that no man could resist who was determined to have the man who didn't want her at the cost of all.

Both of these women are hard role models to emulate. Yet, in my humble opinion, they are the mirrored image of what all women are, like two halves of a whole. The teenager, the free spirit before marriage is Scarlett, the composed woman with the grace of a wife and mother is Melanie. It is an ironic black and white portrait of emotions.

I can remember being introduced to someone and immediately upon speaking my accent gives me away. The gentleman laughed and remarked, "A Scarlett I presume." In all honesty, I was insulted. I consider myself more of a Melanie and yet, the more I thought about it, how exciting it would have been to be the "bell of the ball" just once. Of course, the image that popped into my mind was that of Scarlett at the ball after her husband died of measles, dancing behind the booth until Rhett pulled her out and they turned Atlanta on its ear by having a widow dance.

Hum... come to think of it. I'm always doing something wrong, turning things on its ear. Perhaps, I'm more Scarlett than I realize. One thing I have come to know. A man wants a woman like Melanie to raise his children, but in his bed, he demands Scarlett a woman who lust for life and takes what she wants damn the consequences. As a romance writer, it is the essential part of being a woman and writing those emotions.

I'll leave you today with my favorite picture. Happy Anniversary to Gone With the Wind fans everywhere. 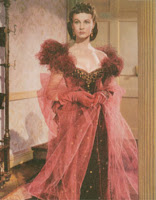 OOPS...I think I was off by a month. Sorry about that! The book came out in May 1936. That's what I get for believing a FB posting from someone else I barely know. But Happy Belated 75th Birthday to 'Gone with the Wind.' And yes, Nancy, I agree. Melanie had more morals and was a LOT less selfish than Scarlett...and less dramatic! She was quite a drama queen! LOL!!!

I still think the best 'remake' of that movie was from Carol Burnett:
Part 1: http://www.youtube.com/watch?v=IH6TBEbP77Q&playnext=1&list=PL721FD4CB5CF762A3

HILARIOUS!!! It shows exactly what you're saying, too. LOL!