Home Sweet Home Life on the range was really green!

When we talk about living green, our generation has nothing on the early pioneers. Living on the prairies meant building homes with little to no timber structure. These homes were constructed with earthen blocks that allowed early settlers to be warm in the winter and cool in summer. Sounds grand with the cost of heating and cooling today.

All you needed was a firm piece of ground and your John Deere plow to cut these bricks three feet long and four inches deep. Stack two or three bricks width and there you have it. The long roots of the grasses would hold the walls together. In the spring, a profusion of wild flowers would grace your roof. It sounds lovely, but there were a few drawbacks.

There are diary entries from these brave souls who stood with umbrellas over their stoves while they cooked to keep the rain from dampening dinner. Dirt would filter down and onto the occupants of the home requiring the tarps to be placed beneath the block ceiling. Worse, in my humble opinion would be the critters who would want to share your warmth, such as bugs, mice and shiver me timbers SNAKES. ( Ok I would not have made it on that account). Yet these sturdy structures provided great protection from fires which could roar around the homes and walls would keep the families and livestock safe. 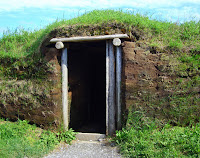 Don't think that these structures were primitive. While most might be constructed in a single room design, other homes had designs of two, possibly three rooms. Often those rooms would be separated by blankets or tarps. Some sod homes had wall paper walls. The 1872 Montgomery Wards Catalog carried window frames for sod homes!

To read more of course, pick up the Little House on the Prairie books by Laura Inglis Wilder.

Interesting blog you got here. It would be great to read something more concerning this matter.
By the way check the design I've made myself Companionship in London

Nice blog post, Nancy! It is interesting about the sod houses. My friend actually designed a modern 'go green' underground house not too long ago. It's still in the design phase, but it sounds great. Would I want to live in one? Probably not, but it's lovely just the same.

I wouldn't do well with the critters, either!

Interesting about the window frames for dirt houses.

yes I was ok til I read about the snakes. ewwwwwwwww mr. No shoulders and I no we don't get along. Yikes.

Thanks for the comments guys.